What a great weekend!  Met the one and only Al Schmitt yesterday at the Northwest Studio Summit.  Followed up with some messages back and forth and found out that he was the one who wrote the critique for my winning mix in the Sennheiser/Neumann Bo Bice mixing contest.  My mix was judged to be the best by the entire panel, which included Al Schmitt, Tom Young, David Thoener, Karl Richardson, Tim Palmer, Greg Lukens, and Cool & Dre.

Some of Al Schmitt‘s comments on my mix were “WOW! Very nice arrangement with the build, textures. You’ve captured and added to every essential element. Wish I had done it! Excellent.”  He gave me perfect marks for the mix, which is a very high compliment from someone who has won 21 Grammy Awards for his recording/mixing work!  After confirming he was the one who wrote my critique today, he also added “ I think you are on your way“.

I’m usually not one to be “star struck”, but how can you be in this business and not be awed by the worked that Al has done.  Having met him in person and through the follow up online correspondence, he definitely deserves his success, not just because of his incredible skills, but also because he is such a nice guy and extremely generous with his time!

So, if you don’t have the connections and can’t afford to work with Al Schmitt, feel free to contact me if you need professional mixing or recording.

Below is Al Schmitt’s full critique of my award winning mix of Bo Bice’s song November.  CLICK HERE for more info on the mix and to take a listen. 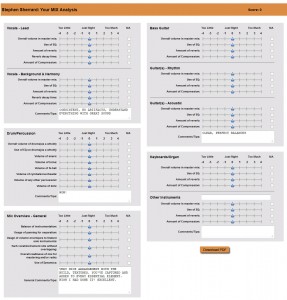