The Console, Converters, and Effects 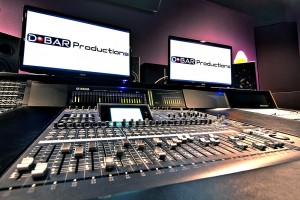 The recording/mixing console is the heart of most studios!  Even these days when computers and their audio interfaces are handling most of the work, a nice  console just makes the job so much easier and more efficient.  With a properly set up studio, centered around a modern console, it’s quick and easy to set up headphone mixes for the clients without worrying about the latency of the computer’s audio card and software.  Plus, you’ve got physical faders and knobs for controlling channel levels plus control room and studio levels.  You can also quickly change between multiple input sources to monitor, set up and monitor external effects, and even use it some consoles as a control surface for your DAW.

My studio is centered around the very powerful Yamaha O2R96 Digital Console.  It interfaces digitally with my DAW system with up to 52 channels of digital inputs, as well as up to 52 channels of digital outputs, all at the same time!  It can reconfigured with a few button presses for Surround Sound, and it also functions as a very tightly integrated control surface for my main DAW software, Steinberg’s Cubase (Yamaha owns Steinberg now).

These days it mostly serves monitoring and control surface duties, as all my A/D and D/A conversions are done by my high end hardware converters, the Universal Audio 2192 Master Audio Interface, and the Lynx Aurora 8 multi channel A/D and D/A converters.  When recording, audio is simultaneously routed from the A/D converters to both the DAW system AND the Yamaha console at the same time, for latency free monitoring!  It also interfaces digitally with my Kurzweil KSP-8 multi effects for reverb or delay in the monitoring path while recording (but without recording the effects, unless desired).  It also has four of its own internal digital effects processors built in, if more or different effects are needed.

Interfacing between the console and the DAW are a pair of very powerful RME Hammerfal PCIe cards attached to two Digiface digital interface boxes.  High performance and low latency performance with up to 52 channels of inputs and 52 channels of outputs at the same time.

Here’s the gear in a less verbose list form: